KAMPALA, Uganda — Ugandan police used tear gas and bullets to break up a street protest Wednesday against a new tax targeting social media users. Two protesters were arrested in downtown Kampala, the capital, after a scuffle in which some policemen were assaulted, said Luke Owoyesigire, a spokesman for Kampala police.

The protest was organized by a popular lawmaker, Robert Kyagulanyi Ssentamu, a pop star who is one in a group of singers who say the tax will have negative impact on the marketing of their music.

Police broke up the protest because Ssentamu did not notify them of his plans, said national police spokesman Emilian Kayima.

Later on Wednesday, Ugandan Prime Minister Ruhakana Rugunda told lawmakers that the tax on social media, as well as another levy on a phone-based payment system known as mobile money, would be reviewed and a new bill brought next week.

Since July 1, social media users have been paying upfront a daily tax of 200 shillings — 5 cents — to access all social media websites and apps, including WhatsApp. The new levy is in addition to the usual data fees.

Uganda’s government, which is trying to cut back on external borrowing, said the new tax measures will help finance big infrastructure projects like resurfacing the many roads that have potholes.

The tax on social media was first proposed by longtime President Yoweri Museveni, who complained about online gossip in a March letter that urged the finance minister to raise money “to cope with the consequences.”

But as CBS News’ Debora Patta reports, activists fear it only clamps down on media freedom.

Museveni has ruled Uganda since 1986. 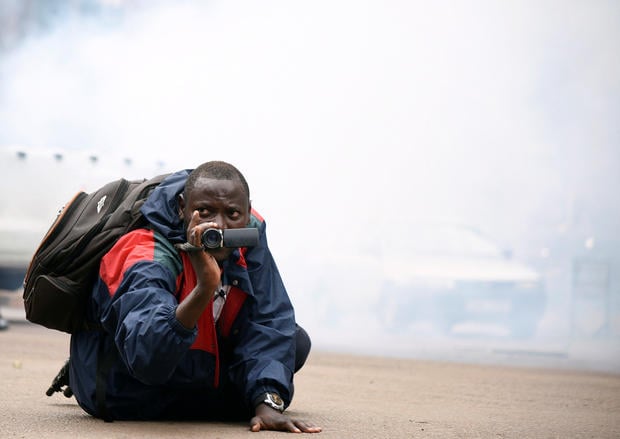 A Ugandan journalist uses his camera after riot policemen fired tear gas to disperse activists led by musician turned politician, Robert Kyagulanyi, during a demonstrating against new taxes including a levy on access to social media platforms in Kampala, Uganda, July 11, 2018.