With three space station fliers heading home Sunday after a 168-day mission, three fresh crew members made final preparations for launch three days later to boost the lab’s crew back to six in a rapid-fire rotation that will prevent any major interruption of research activity.

Launched last Dec. 17, Shkaplerov and his crewmates plan to fire their braking rockets for four minutes and 40 seconds starting at 7:47 a.m., slowing the ship by 286 mph and dropping the far side of the orbit deep into the atmosphere.

If all goes well, the central crew module will make a parachute-and-rocket-assisted touchdown on the steppe of Kazakhstan near the town of Dzhezkazgan at 8:40 a.m. After initial medical checks, Tingle and Kanai will be flown back to the Johnson Space Center in Houston while Shkaplerov will head to Star City near Moscow for debriefing.

“I can’t believe that Expedition 55 is already over,” Tingle wrote in a recent blog entry. “Last night we had our last movie night. The entire crew gathered in Node 2 and watched ‘Avengers Infinity Wars’ (sic) on the big screen. We enjoy each other’s company … and this was a welcome break from the daily grind of trying to complete the required stowage, maintenance and science activities while preparing for departure.”

During his last full weekend in space, Tingle said, “I gave myself a haircut. We usually clean our spaces each weekend to make sure we can maintain a decent level of organization, efficiency and morale. This weekend is no different, and it is time for me to vacuum out all of our filters and vents. You’d be amazed at what we find!”

During a brief change-of-command ceremony Friday, Shkaplerov thanked Feustel’s crew for its support and turned over a ceremonial key to the outpost.

“It’s been three months since we started Expedition 55 (when) I took command of the space station,” Shkaplerov said. “We are going to return to the Earth. … I want to say thank you very much, Drew, Ricky and Oleg, for your friendship, for your help every day. My crewmates, my space brothers, I’m very proud to be part of our Soyuz crew.”

Feustel thanked Shkaplerov in return “for welcoming us to the ISS, taking care of us, making sure we were ready to work when we arrived, you made the transition seamless.”

“We appreciate your patience and your guidance and your leadership, and we look forward to a safe and soft landing for you,” he added.

With touchdown, Tingle and Kanai, both completing their first spaceflight, will have logged 168 days in space during a voyage spanning 2,688 orbits and 71.2 million miles since launch. Shkaplerov, a veteran of two earlier station visits totaling a full year, will have logged 532 days off planet.

All three men carried out a single spacewalk each during their stay, welcomed four visiting vehicles — one Soyuz and three unpiloted cargo ships — and oversaw the departure of a like number, along with carrying out a full slate of scientific research.

With the departure of Shkaplerov and his crewmates, Feustel, Arnold and Artemyev, launched to the station March 21 aboard the Soyuz MS-08 spacecraft, will have the lab to themselves for just five days before a fresh crew arrives. 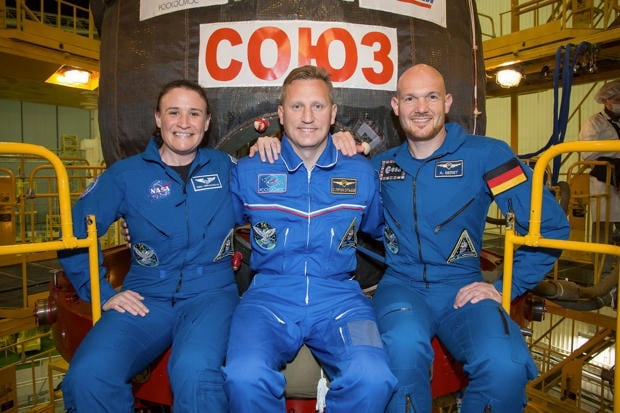 Climbing directly into the plane of the space station’s orbit, the Soyuz will be released from its carrier rocket eight minutes and 45 seconds after liftoff. Over the next two days, Prokopyev and Gerst will monitor an automated rendezvous, catching up with the space station early Friday. They plan to dock at Rassvet around 9:07 a.m.

After a traditional video chat with friends and family back in Moscow, the new arrivals will be given a safety briefing before all six crew members get down to work.

Gerst spent 165 days aboard the station in 2014, but Prokopyev and Auñón-Chancellor will be making their first flights.

Auñón-Chancellor, a veteran flight surgeon, originally was assigned to a mission later this year, but she was moved up to the Soyuz MS-09 crew after one of its original crew members, astronaut Jeanette Epps, was suddenly bumped from the Prokopyev-Gerst crew in January.

NASA provided no explanation for the late crew swap, Epps had no public comment and Auñón-Chancellor would only say she planned to be ready for launch despite an accelerated training schedule and that she already was on good terms with her new crewmates.

“It’s a relatively short amount of time from the crew assignment, but I’ve known these guys for a very long time,” she said. “Alex and I were selected in the very same (astronaut) class and even from the beginning, when I started training in Russia, I’d also met Sergey. So, for us, in all honesty, this is like one big family. It was not uncomfortable at all, it was extremely smooth.

“I feel like I’ve been working with these guys forever,” she added. “It’s been very easy. … Our families have gotten together several times. It’s been a lot of fun.”

Auñón-Chancellor came to NASA in 2006, working as a contract flight surgeon. She spent more than nine months in Star City supporting medical operations with space station crew members and participated in water survival training in Ukraine.

After selection as a NASA astronaut in 2009, she spent two months in Antarctica searching for meteorites as part of a scientific expedition and later served as an aquanaut aboard the Aquarius underwater laboratory.

In a satellite interview with CBS News during final training in Moscow shortly before departing for Baikonur, Auñón-Chancellor said she was well prepared and looking forward to launch.

“The Soyuz is a wonderfully robust and redundant vehicle,” she said. “The great thing is the Russians have been flying a very long time, just like we have, and we’ve been flying together for a very long time. They do a great job here in Star City preparing an international crew … to act in an operational environment and follow all the same rules and procedures to make sure that mission is successful.”

As for the safety and reliability of the Russian ferry ship, “I have complete faith in the Soyuz,” she said. “It is a wonderfully robust vehicle.”

Gerst said he was excited about getting a second chance to fly in space.

“Everybody who’s flown to space wants to go back,” he said. “Being in space is such a special feeling, you can’t even put it down to only one thing. It’s not only the floating, it’s not only the looking out at this beautiful planet, it’s not only the perspective that we have, it’s more knowing where we are.”

Before his first flight, he said, “I saw space as something very special, I thought this is a very special place to go to. When I was up there, I actually learned it was the opposite. Space is everywhere out there, the universe is gigantic, it’s black and empty. Of course, there are quite a few interesting places to go, like moon and Mars, and we will go there, but most of it is empty.”

“So the real special place, and that’s what you realize in space, is actually our planet Earth,” Gerst said. “Seeing that from the outside, seeing that from a step back, made me realize that. That was a very beautiful thought.” 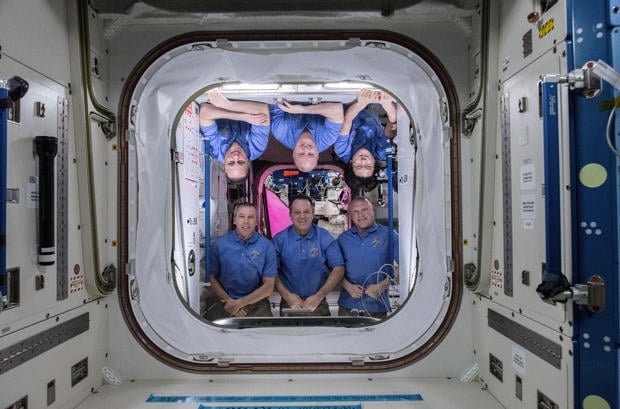 Auñón-Chancellor said she looked forward to conducting a variety of medical research to find out how she personally is affected by the rigors of the space environment.

“You hear all these stories about how people feel, the fluid shift they feel in their bodies, everything in those first few days of flight,” she said. “So the first kind of big experiment is almost my own case study where I look at myself and see how I react and maybe compare that with those of my colleagues.”

She also is interested in studying vision changes in astronauts who spend long periods in weightlessness, a relatively recent discovery.

“I think we don’t give the body enough credit for how well it does with very low-level chronic insults,” she said. “What I mean by that is how well the body is with adapting to low-level radiation, levels of carbon dioxide that are maybe a little higher on station than they are on Earth, a change in nutrition, microgravity itself. The body does a fantastic job adapting, but you still see markers of that. So what markers are we missing?”

Gerst, who holds a Ph.D. in geophysics, also is a fan of biological research, especially an experiment designed to chart changes in brain structure before, during and after a long-duration space flight.

“When we’re up there in the space station it’s a little bit like what people suffer after having a stroke, which is certain regions of the brain are not working properly anymore,” he said. “For us up there in space, that’s the sense of balance, our orthostatic senses are not completely working anymore, the brain has to compensate for that.”

It compensates by getting orientation cues from the eyes.

“That switch over is very similar to what people experience when they have a stroke and have to re-learn how to walk, to speak, all those things,” Gerst said. “The processes are similar, and we hope to study them. … For us, luckily, (those changes are) reversible, but we hope we can use that to develop a treatment for people on Earth.”