New York’s Metropolitan Museum of Art is filled with masterpieces by giants like Picasso and Rembrandt.  Next week, Don Felder’s Gibson double-necked guitar will join them. It’s the instrument Felder has used for 40 years to play “Hotel California,” the masterpiece he co-wrote for The Eagles.

And it will be shown along with Keith Moon’s custom drum set, Jerry Lee Lewis’ baby grand piano, and John Lennon’s 12-string Rickenbacker, at the Met’s new exhibition, “Play It Loud.” It’s the first time an art museum has honored the instruments of rock ‘n’ roll

“He’s still got the traveling tags on the case,” said mason.

Dobney spent five years organizing the exhibition with the Rock & Roll Hall of Fame. By bringing all these instruments together, he said, “We’re celebrating these amazing artists.”

“He really wanted the drums to say Ludwig, so that everybody knew he was playing American drums,” said Dobney.

And there’s what looks like a time machine: the towering Moog synthesizer Keith Emerson rigged up on top of a Hammond organ in 1970 for Emerson Lake & Palmer.

Steve Miller’s much smaller synthesizer is here, too, on which he made the synth parts for “Fly Like an Eagle”

“And here it is, 50 years later!” said Miller. “Doesn’t that look great? I mean, it never looked that good in my studio. It’s fantastic!”

For musicians like miller, the exhibit is full of inspiration. The Telecaster of blues legend Muddy Waters is here:

“As Muddy always said, you know, the blues had a baby and it’s called rock ‘n’ roll,” said Miller. “There it is. This is the instrument. This is the father right here!”

So is the guitar of The Everly Brothers’ Don Everly. “I can hear the lick!” Miller said.

Miller’s own Les Paul TV Special is in the exhibit. He had it decorated by a Hawaiian surfboard artist.

Mason asked, “How does it feel to see it in the case?”

“Well, I really was hoping to take it out of the case and play it for ya’,” he replied.

Well, then he did. 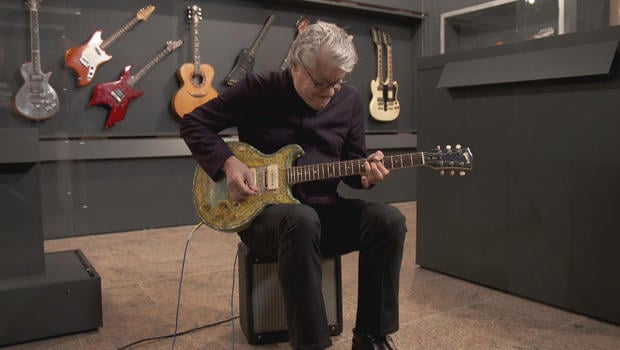 Steve Miller playing his guitar at the Metropolitan Museum of Art. CBS News

Of all the tools for making music, the guitar became central to rock’s image. The guitar solo in The Eagles’ “Hotel California” is considered one of the greatest of all time. Don Felder needed a double-neck guitar to perform all the parts he’d recorded live.

“So literally, it’s like two guitars in one, kind of glued together,” said Felder. “That was the only way I could play it.” 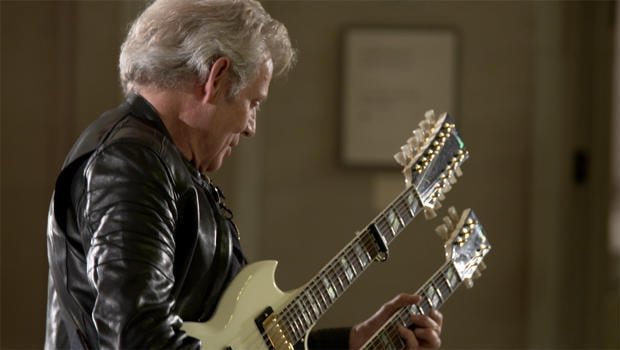 Don Felder of The Eagles plays “Hotel California” at the Metropolitan Museum of Art. CBS News

The white Stratocaster Jimi Hendrix played at Woodstock in 1969 is also iconic. Felder was in the crowd that day: “Hendrix was in a whole other orbit of his own,” he said.

The instruments of rock’s stars have become almost as celebrated as the musicians themselves. The “Play It Loud” exhibition honors what the Metropolitan Museum calls “one of the most important artistic movements of the 20th century.”

Felder said, “I guarantee you that all the players that had these instruments here, you can identify their style, their playing. You can hear the first couple of bars and go, ‘I know who that is.'”