Sam Rockwell dances into his latest role in “Fosse/Verdon”

Correspondent Tony Dokoupil noted, “If you were take every role you’ve ever been in and dump it out on the floor as action figures …”

“It would be weird!” Rockwell laughed. “There’s a lotta wigs and fake beards in there.”

“Why are you so open about the work?”

“Not to be too pretentious about it, but there is a lot that goes into it. You know, you don’t just show up.”

In fact, he’s been disappearing into characters for so long, and so completely, he was once about as unknown as a celebrated actor can be. Or as he introduced himself while hosting “Saturday Night Live” last year, “You probably know me as ‘that guy from that movie,’ you know, not the main guy, but the other guy.”

But last year, Rockwell took home an Oscar for his role as a racist cop in the movie “Three Billboards Outside Ebbing, Missouri.”

This year he was nominated again for his portrayal of President George W. Bush in “Vice.”

And now, at 50, he’s reminding audiences that he’s always had the moves for center stage. In a new FX series, “Fosse/Verdon,” Rockwell plays Bob Fosse, a dancer and choreographer turned director, famed for movies like “Cabaret” and “All That Jazz.”

Dokoupil asked, “What was it that drew you to him?”

“I guess the charisma,” he replied. “There’s a kinda ‘cool guy thing’ about him. He was a genius, and yet he was also really messed up.”

“Very haunted, yeah. I guess I’m attracted to characters like that.” 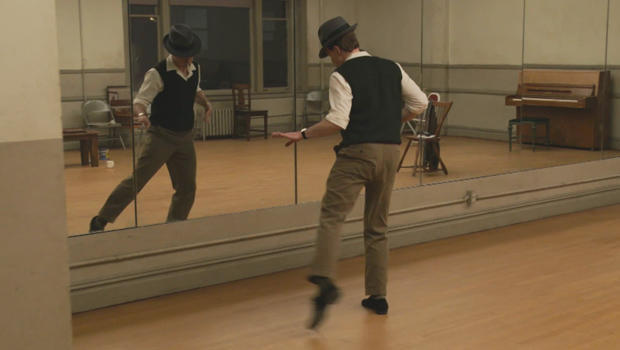 It helps that Rockwell is also a dancer, sort of.  “I just messed around,” he said. “You know, I watched ‘Risky Business,’ I think that’s how I learned how to do the splits. I watched ‘Footloose.’ I fancied myself a young Kevin Bacon probably!”

Rockwell grew up the only child of divorced parents.  He shuttled between San Francisco, where his father was a labor organizer, and New York, where his mom was a struggling actor. From a young age he was exposed to the actor’s lifestyle: “Well, you’re backstage with people. It’s a vaudeville existence, I guess you could say.”

“What does that do to a kid?” Dokoupil asked.

“It’s good and bad. I think it makes you wiser, and it also makes you a little strange. Wwhen you go back to the normal sort of middle-class life or working-class life when you’re at school with kids who are having sort of a normal existence, you relate to them a little differently.”

His first role was a 10-year-old Humphrey Bogart in a “Casablanca” sketch with his mother. “It was thrilling,” he said. “I got the bug, like, right away.” 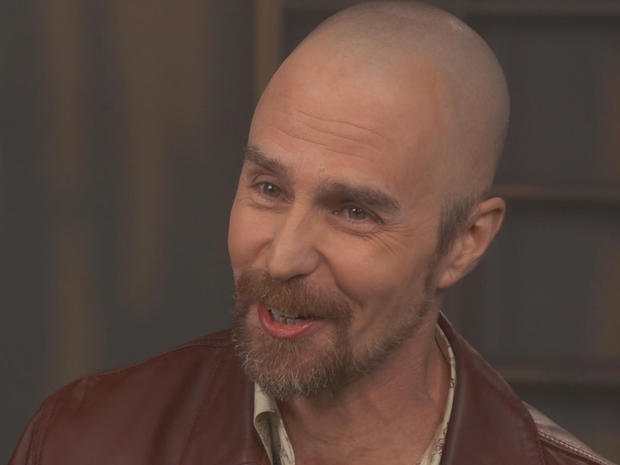 And he dreamed big. “Like any other young actor you go through phases. I went through a Robert De Niro phase. And you wanna be Chris Walken, you wanna be Gene Hackman.”

But as he grew into being Sam Rockwell, other actors started to notice. George Clooney once reportedly threw a golf club into a wall to get him into “Confessions of a Dangerous Mind.” (“I think that’s true!” Rockwell said.) And Brad Pitt showed up unannounced at Rockwell’s house to recruit him for a role.

The secret may be that he has always anchored his roles in research. To play a smalltown cop in “Three Billboards,” he actually hired a smalltown cop to read the script and spend some time with him. “I wanted to get it right. And it was helpful, you know, just little details like their haircut. And then just the way their demeanor and how they handle themselves.”

After more than 70 films and dozens of television shows, Rockwell is savoring the life he’s built, including at home with longtime girlfriend, actor Leslie Bibb.  “Certainly in the love department I’m very lucky. And the work department, I am.”

These days, having “luck” means pouring everything into his starring turn as Bob Fosse, while also considering new possibilities.

Dokoupil asked, “Does it occur to you, as it occurs to me, that in the same way you’re name-checking these different great actors, there are actors coming up today who are gonna be like, ‘Oh, you know, I just grew up watching Sam Rockwell. I just wanna be like Sam Rockwell.'”

“That would be a beautiful thing,” Rockwell said. “And that would make my heart soar like a hawk!”

To watch a trailer for “Fosse/Verdon,” click on the video player below.