Wrapping up a historic mission, SpaceX’s innovative Crew Dragon, the first new American spacecraft designed to carry astronauts to orbit since the shuttle’s debut in 1981, wrapped up a unpiloted maiden test flight Friday, plunging back to an Atlantic Ocean splashdown after a five-day visit to the International Space Station.

Assuming a detailed post-flight inspection and data analysis confirm the capsule’s apparently problem-free performance, NASA will be a major step closer to launching two astronauts aboard the SpaceX Crew Dragon capsule this summer, the first flight of a U.S. crew from American soil since the shuttle made its final flight in 2011.

Waiting in the wings is Boeing and its CST-100 Starliner capsule, being prepared for an unpiloted test flight this spring and its initial piloted launch this fall.

Whenever one or both spacecraft begin operational flights to the station, possibly by the end of the year, NASA will finally be able to end its sole reliance on Russian Soyuz spacecraft to ferry astronauts to and from low-Earth orbit at a cost of more than $80 million a seat.

“Fifty years after humans landed on the moon for the first time, America has driven a golden spike on the trail to new space exploration feats through the work of our commercial partner SpaceX,” astronaut Anne McClain said as the Crew Dragon departed the space station.

“It won’t be long before our astronaut colleagues are aboard Crew Dragon and Boeing’s Starliner vehicle, and we can’t wait.”

Launched last Saturday atop a SpaceX Falcon 9 rocket, the Crew Dragon spacecraft executed a flawless rendezvous with the International Space Station, catching up with the outpost early Sunday and, after a series of tests, gliding in for a smooth automated docking at the lab’s forward port.

Station commander Oleg Kononenko, flight engineer Anne McClain and Canadian astronaut David Saint-Jacques quickly inspected the craft, set up ventilation ducts and unloaded about 400 pounds of crew supplies and equipment. The capsule was repacked with about 300 pounds of material for return to Earth, including a failed spacesuit component and two cold bags loaded with experiment samples.

Hatches were closed at midday Thursday and right on time, at 2:31 a.m. Friday, latches holding the Crew Dragon in place retracted and the ship’s flight computer executed a series of thruster pulses to slowly pull away from the station.

After dropping behind and below the lab, the Crew Dragon adjusted its orbit and jettisoned its empty trunk section, an unpressurized cargo compartment behind the crew compartment, to set the stage for entry.

Then, a few seconds before 7:53 a.m., the Crew Dragon’s braking rockets fired up for a planned 15-minute 25-second burn, slowing the ship and dropping the far side of its orbit into the atmosphere. After a half-hour freefall, the spacecraft slammed into the top of the thick lower atmosphere at a velocity of nearly five miles per second.

Protected by an advanced heat shield, the Crew Dragon quickly slowed in a blaze of atmospheric friction, rapidly shedding horizontal velocity and dropping steeply toward the Earth, descending along a northwest-to-southeast trajectory across the eastern United States.

Company founder Elon Musk said during a post-launch news conference last Saturday that the capsule’s hypersonic entry, along with launch, rendezvous and docking, posed the greatest risks. The entry was a concern, he said, because the spacecraft’s shape is not as symmetrical as the version used to carry cargo to the station.

“The backshell is not symmetric in the way Dragon 1 is, it’s not sort of a smooth conic like Dragon 1 is, you’ve got the launch escape thruster pods that could potentially cause a roll instability on re-entry,” he said. “I think it’s unlikely, we’ve run simulations a thousand times, but this is a possibility.

But right on schedule, two drogue chutes popped out to slow and stabilize the ship, followed a few minutes later by four main parachutes. Television views from a NASA WB-70 research jet and nearby recovery ships showed the spacecraft blazing through the sky and then descending to a gentle splashdown about 265 miles northeast of Cape Canaveral at 8:45 a.m. 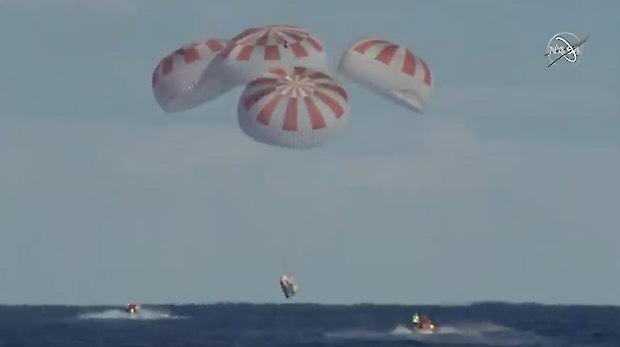 SpaceX’s Crew Dragon spacecraft settles to a gentle splashdown in the Atlantic Ocean northeast of Cape Canaveral to wrap up a successful test flight, March 8, 2019. NASA

The crew of the GO Searcher, a SpaceX ship rigged to recover returning crew capsules, planned to haul the spacecraft aboard and return it to Port Canaveral for detailed post-flight inspections.

After the inspections are complete, the same spacecraft will be refurbished and launched again in April for a critical in-flight abort test, triggering the capsule’s eight Super Draco rocket motors to demonstrate its ability to quickly pull away from a malfunctioning booster. A brand new Crew Dragon will be used for the first piloted test flight this summer.

The Commercial Crew Program is the end result of a series of NASA-funded industry competitions in the wake of the shuttle’s retirement to develop a new American spacecraft to carry astronauts to and from the space station.

Unlike past programs that NASA controlled from top to bottom, the new spacecraft were intended from the start to be commercially developed, giving the winning companies ownership and much more control over the finished product along with the freedom to sell seats to non-NASA customers.

In so doing, NASA hopes to turn over the task of “routine” transportation to low-Earth orbit to the private sector, freeing up government resources for deep space exploration — a return to the moon and eventual flights to Mars.

Boeing won contracts totaling $4.82 billion to develop the CST-100 Starliner, a capsule that will launch from the Cape Canaveral Air Force Station atop a United Launch Alliance Atlas 5 rocket.

SpaceX also won a series of contracts totaling some $3.1 billion to date to develop a piloted version of the company’s Dragon cargo ship. The company holds a separate cargo contract valued at $3.04 billion for 20 space station resupply flights and another contract for an unspecified amount for at least six additional flights through 2024.