Trump attacks Sessions ahead of primary runoff for US Senate

MOBILE, Ala. (AP) — President Donald Trump lashed out at former Attorney General Jeff Sessions as the Alabama Republican advanced to a primary runoff in his quest to win back his old U.S. Senate seat.

Sessions held the seat for two decades, but was forced into a runoff with a political newcomer after being wounded by Trump’s prior criticisms of his recusal in the Russia investigation.

The newest Twitter scolding by Trump on Wednesday could further damage Sessions’ hopes of a political resurrection. Sessions fell short of winning the GOP nomination and will face former college football coach Tommy Tuberville in a Republican runoff.

The winner of their March 31 runoff will face incumbent Democratic Sen. Doug Jones. 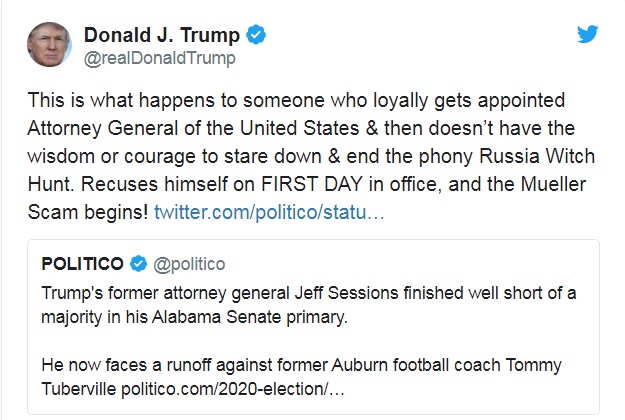