In a surprise announcement, agency Administrator Jim Bridenstine said the revitalized moon program will be named Artemis after the Greek goddess of the moon.

“The first time humanity went to the moon it was under the name Apollo,” he said. “The Apollo program forever changed history. … It turns out that Apollo had a twin sister, Artemis. She happens to be the goddess of the moon. Our astronaut office is very diverse and highly qualified. I think it is very beautiful that 50 years after Apollo, the Artemis program will carry the next man — and the first woman — to the moon.”

President Trump announced the administration’s supplemental budget request in an afternoon tweet, writing, “We are restoring @NASA to greatness and we are going back to the Moon, then Mars. I am updating my budget to include an additional $1.6 billion so that we can return to Space in a BIG WAY!”

An artist’s concept for NASA’s lunar Gateway space station in orbit around the moon. The Gateway will serve as a staging base for astronauts to land on the moon in 2024. Boeing

NASA, of course, is already in space in a big way with ongoing operations aboard the International Space Station, development of new crew ferry ships to carry U.S. astronauts to and from Earth orbit and ongoing work to develop a new super rocket — the Space Launch System — and Orion crew capsules to carry astronauts back to the moon.

NASA also is developing plans for the lunar “Gateway” space station that will be assembled in orbit around the moon to serve as a staging base for eventual piloted flights down to the surface using commercially developed landers and ascent vehicles.

But until recently, NASA was planning to execute that program over a 10-year period, an already difficult schedule calling for the first boots on the moon in 2028, some 59 years after Neil Armstrong‘s “giant leap for mankind.”

The moon mission architecture remains in place, but development will have to be rapidly accelerated to give NASA any chance of meeting the administration’s ambitious 2024 deadline. And that will cost money.

“This additional investment is a down payment on NASA’s efforts to land humans on the moon by 2024,” Bridenstine told reporters in an evening teleconference. “In the coming years, we will need additional funds. But this is a good amount that gets us out of the gate in a very strong fashion and sets us up for the future.”

According to a NASA fact sheet, the new budget request includes $1 billion “to enable NASA to being supporting the development of commercial human lunar landing systems three years earlier than previously envisioned. This acquisition strategy will allow NASA to purchase an integrated commercial lunar lander that will transport astronauts from lunar orbit to the lunar surface and back.”

Gateway development will be limited to what is needed to make the station a viable staging base for trips to the surface. That will free up $321 million for other moon spending.

An additional $651 million is earmarked for the Space Launch System — SLS — heavy lift rocket and Orion spacecraft. Lunar surface technologies and propulsion systems would receive an additional $132 million with $90 million going to robotic exploration and research near the moon’s south pole. 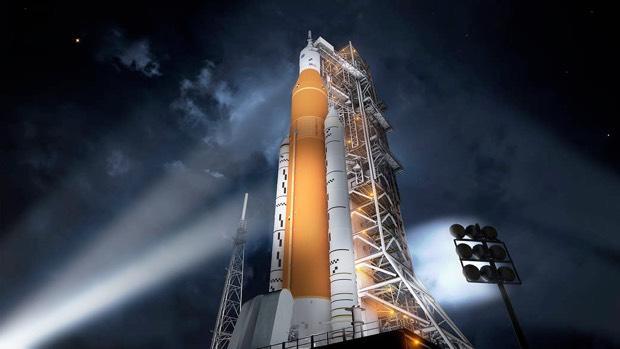 A rendering of the Space Launch System heavy lift rocket Boeing is building for NASA to boost Orion crew capsules and other equipment to the moon. An initial unpiloted test flight is planned for 2021 before a four-person crew carries out a piloted test flight in late 2022 or 2023. The rocket’s third flight will carry astronauts on the next moon landing mission in 2024. NASA

In a YouTube video message to NASA employees, Bridenstine said the additional funding “will allow us to move forward with design, development and exploration.”

“While there are many steps ahead in the budget and appropriations process, all of us at NASA should be very proud and excited by this unique opportunity,” Bridenstine said in the video address. “Our efforts will include new work at NASA centers to provide the key technologies and the scientific payloads needed for the Gateway and lunar surface, adding to efforts that are already underway all across our country.

“Additionally, we envision strong commercial partnerships that will help increase innovation and reduce costs to the American taxpayer.”

Big @NASA news! The President has submitted an FY2020 budget amendment that provides an increase of $1.6 billion for our #Moon2024 efforts. We are going.

Watch the video I sent to the workforce: pic.twitter.com/7kG8h4msdC

Additional funding will be required in follow-on budgets, but no details were immediately available. Some early estimates ran as high as an additional $8 billion per year, but Bridenstine insisted such numbers were far beyond anything NASA envisions. But he added that higher amounts will, in fact, be needed in the coming few years.

“We are working through that diligently,” he said. “Know this, any development program such as this follows a very standard bell curve where the initial years are pretty low and then they ramp up and then they come back down to get to a sustainable kind of operation.

“The answer is we expect in future years it will be more than the current $1.6 billion for 2020. We all know that, and we are working day in and day out to come up with what those numbers are.”

Speaking to industry executives and engineers earlier this month, Bill Gerstenmaier, director of space operations for NASA, said a critical element for meeting the schedule is fast action by Congress.

To put astronauts on the moon by the end of 2024, “I honestly need a budget come Oct. 1,” he said. “Typically, we’re in a continuing resolution. I need some mechanism to get funding, I’m going to need some ability to transfer money across accounts, I’m going to need support from Congress to go do that.”

As for the schedule, “it fits on paper, it looks like something we can go do,” he said. “But I will tell you it’s not easy, and it is not risk-free.”

“We see lots of challenges in terms of can we get the budget and can we get it sustainable,” Gerstenmaier said. “If we go through another wonderful furlough like this year, that’s the end of the world for us. This is a plan, but we’re going to try to expose all those risks, all those dependencies and then see if this country is willing to step up to this challenge.”

Gateway modules will be launched aboard commercial rockets while the SLS mega booster is used to launch astronauts to the vicinity of the moon aboard Orion capsules. Gateway will feature a power and propulsion module on one end would be used to provide solar power and to change the orbital parameters as needed to allow access to the entire moon, not just the equatorial regions explored by the Apollo astronauts.

NASA is seeking Gateway module designs from a variety of American aerospace companies and is encouraging foreign partners to participate along the lines of the European Space Agency’s participation in the Orion program. ESA is providing the Orion capsule’s critical service module, housing life support, power and propulsion systems.

Orion astronauts will dock at the Gateway station, carry out science observations, oversee robotic landings on the moon and, eventually, board reusable lunar landers and fly down to the surface. After carrying out their missions, the astronauts will use an ascent stage of some sort to fly back to Gateway where their Orion capsule will be waiting to carry them back to Earth.

The general target area for astronaut landings is the moon’s south pole, where ice is present in permanently shadowed craters.

Gaining access to ice on the moon is a sort of holy grail given that it can be melted to provide water for astronauts and can be broken down, through solar-powered electrolysis, into hydrogen and oxygen, providing, in theory, rocket fuel, air and water.

But getting from Gateway to the surface poses major hurdle given the short time available. In an interview with CBS News on April 9, Bridenstine said one of the most difficult hurdles for meeting the 2024 challenge is development of a lander.

“The most significant piece is gonna be the landing capability,” he said. “Lunar landers are difficult to build. They take time, they take money. And we don’t have that capability. We did in the 1960s. There’s not another country on the planet that has anything near the capability to land on the surface of the moon. And we’re going to start right away building that capability. That will be unique, and impressive and enable our astronauts to get to the surface of the moon.” 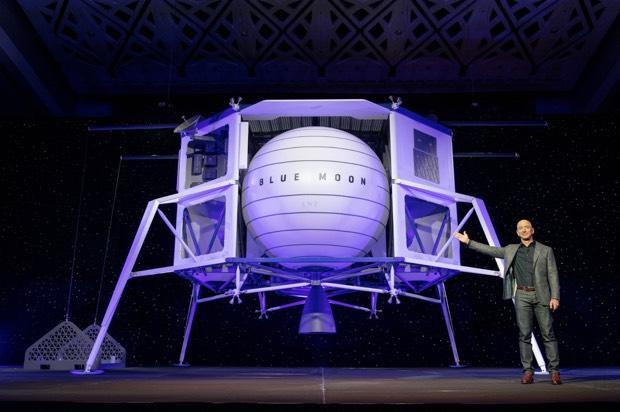 Amazon-founder Jeff Bezos shows off a mockup of the Blue Moon lunar lander developed over the past three years by Blue Origin, his space exploration company. NASA plans to rely heavily on commercial systems, possibly including Blue Moon, to help get astronauts to the moon’s surface in just five years. Blue Origin

The same day Bridenstine talked of the challenge of landing on the moon, Amazon-founder Jeff Bezos unveiled a lunar lander called Blue Moon that could put 6.5 metric tons on the surface of the moon. He said Blue Moon, carrying an ascent stage, could meet NASA’s schedule for landing astronauts on the surface by 2024.

“I love this,” Bezos said of the agency’s accelerated plan to return to the moon. “It’s the right thing to do, and for those of you doing the arithmetic at home, that’s 2024, and we can help meet that timeline, but only because we started three years ago. It’s time to go back to the moon, this time to stay.”

Gerstenmaier said NASA expects lander proposals from several companies and hopes to have contracts in place by September or October.