How to watch the 2019 NBA Playoffs

It’s the best time of the year for pro-hoops fans as the 2019 NBA Playoffs kick off this weekend. There’s no shortage of storylines as LeBron James misses his first postseason since 2005. His move to the West means a new king will be crowned in the Eastern Conference, and MVP finalist Giannis Antetokounmpo is hoping to lead his No. 1 seeded Milwaukee Bucks to the NBA Finals.

His road won’t be easy with Kawhi Leonard’s No. 2 Toronto Raptors, and Joel Embiid’s star-studded, No. 3 Philadelphia 76ers squad looking to make a splash in the postseason.

In the West, all eyes will be on the defending champion Golden State Warriors, who are looking to win their third consecutive championship, and their fourth NBA title in five years.

Check below for the full schedule of first-round matchups. All times are Eastern.

What to look for: For the first time since the early 1970s, the Bucks earned the best record in the NBA and won 60 games. Led by Antetokounmpo and sharpshooter Khris Middleton, the Bucks dominated their competition and wore teams down due to their deep bench and brilliant offensive schemes drawn up by head coach Mike Budenholzer. Antetokounmpo, better known as the “Greek Freak,” averaged 27 points, 12 rebounds and six assists while playing elite defense during the regular season.

The Pistons stumbled into the playoffs with 41 wins as they rode the back of superstar forward Blake Griffin, who had arguably the best season of his 10-year career. Griffin’s knee has flared up recently and Detroit doesn’t stand much a chance if he’s hobbled.

What to look for: The Eastern Conference rivals meet yet again in a series that should be competitive. After nearly making the NBA Finals last year, this season couldn’t help but feel like a letdown for the Celtics: They couldn’t crack 50 wins, were dogged by Kyrie Irving drama, saw Jayson Tatum and Jaylen Brown struggle at times, and saw Gordon Hayward fail to return to form from his ankle injury. Even so, the Celtics are still deep enough to make a Finals run.

The gritty Pacers could’ve folded when superstar guard Victor Oladipo was lost for the season in March, but they hung in there and rallied around forward Bojan Bogdanovic, center Myles Turner, and sixth-man of the year candidate Domantas Sabonis. This matchup is up for grabs.

What to look for: Perhaps no team made bigger in-season moves than the 76ers, who traded for both Jimmy Butler and Tobias Harris. Along with All-Star center Joel Embiid (who averaged 27 points and 14 rebounds per game), All-Star point guard Ben Simmons, and ageless sharpshooter J.J. Reddick, the 76ers boast arguably the best starting five in the entire conference. Their bench has been disastrous though and the mercurial Butler hasn’t yet found a rhythm.

The Nets certainly won’t make this easy for Philadelphia. One of the surprise stories of the NBA season, the young team won 42 games while playing a fast-and-loose style led by D’Angelo Russell, Spencer Dinwiddie and forward Caris LeVert. Center Jarrett Allen won’t back down from Embiid. Don’t be surprised if the Nets push this to seven games.

Ben Simmons of the Philadelphia 76ers on May 3, 2018 in Boston. Maddie Meyer / Getty

What to look for: The Raptors are one of the favorites to win the NBA Finals this year, as they feature arguably the best player in the Eastern Conference in All-Star forward Kawhi Leonard. In his first season in Toronto, Leonard returned to form by averaging 27 points and seven rebounds, while playing his usual stellar defense. Forward Pascal Siakam is one of the league’s most improved players, and the Raptors also feature the solid veteran trio of Kyle Lowry, Marc Gasol, and Danny Green.

The Orlando Magic return to the playoffs after nearly a decade away. This rag-tag bunch is powered by All-Star center Nikola Vucevic, but feature little else that can scare the Raptors. Expect this series to be one-sided.

What to look for: The Golden State Warriors open the playoffs looking for their third straight NBA championship and their fifth straight Finals appearance. With rumors surrounding whether Kevin Durant would leave Golden State in free-agency, this may be the last chance to watch the Warriors dominate in the playoffs. Along with the superstar backcourt of Steph Curry and Klay Thompson (who may be the two best shooters ever), Durant and the Warriors should make short work of the Clippers.

Los Angeles is coached by the affable Doc Rivers, and features a fun group of players led by Lou Williams, Danilo Gallinari, and young studs Shai Gilgeous-Alexander and Montrezl Harrell. 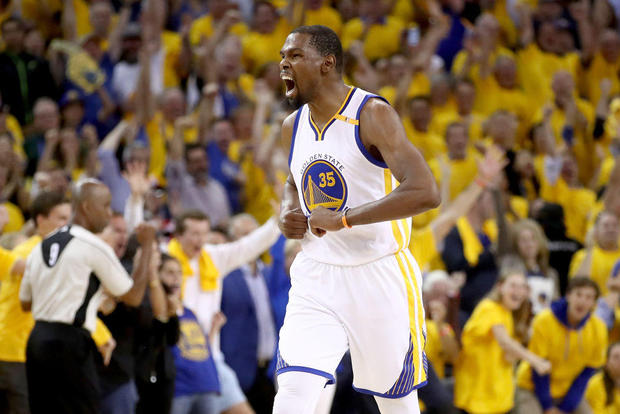 What to look for: In what is certainly the prime-time matchup of the first round, James Harden’s Rockets go toe-to-toe with Donovan Mitchell’s Jazz. Harden had one of the greatest offensive seasons ever in 2018-19, averaging 36 points and sinking a league-record 378 three-pointers on 1,028 three-point-attempts. While critics claim the Rockets rely too heavily on three-pointers and free-throws, Houston’s style is remarkably effective.

On the other hand, Utah plays an old-fashioned style of basketball, founded on tough defense and classic offensive sets. Center Rudy Gobert is probably the best defensive player in the league, while Mitchell is good enough to win an entire series by himself. Expect this contrast in styles to be a great matchup that could go seven games.

What to look for: Winners of 53 games, the Blazers limp into the playoffs after losing center Jusuf Nurkic for the season and almost losing guard C.J. McCollum to a knee injury. But they still have superstar guard Damian Lillard, one of the best players in the league, who averaged 26 points, seven assists and five rebounds per game over the regular season. Unfortunately, as good as Lillard is, he may be no match for the Thunder’s dynamic duo of Russell Westbrook and Paul George.

Westbrook averaged a triple-double for the third season in a row, a remarkable stat considering that prior to Westbrook’s run it had only been done once before in the NBA’s 73-year history. Westbrook’s partner in crime, Paul George, submitted the finest offensive and defensive season of his career, and is an MVP candidate. If everything is clicking, the Thunder are one of the few teams in the league good enough to beat the Warriors in a series. 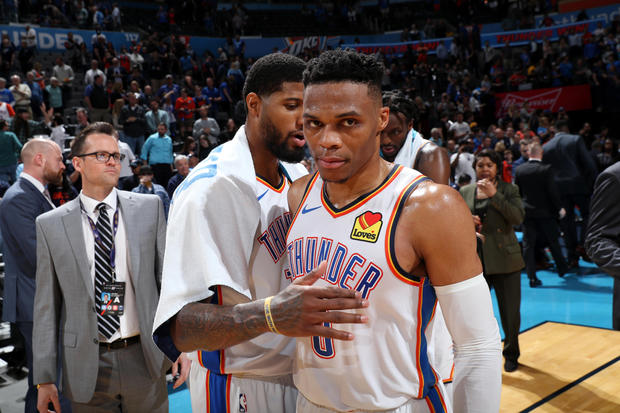 What to look for: Without much star-power on either side, the Denver-San Antonio series appears to be relegated to the doldrums of NBATV. Regardless, Denver and San Antonio should be a clinic of exciting offense for basketball purists. Led by do-everything center Nikola Jokic, the Nuggets had one of their best years in franchise history. Jokic has single-handedly revolutionized the center position by averaging 20 points, 11 rebounds and seven assists per game. He has a deep squad around him featuring seven players who averaged double-figures in points. The Spurs, who have made the NBA playoffs for the 22nd year in a row (and 28 of the last 29 years), come in to the tournament playing with nothing to lose.

The Spurs feature a trio of effective veterans in LaMarcus Aldridge, DeMar DeRozan and Rudy Gay, as well as a number of effective role players. They are coached by the indispensable Gregg Popovich, who some consider the greatest head coach in league history. While the Nuggets should win the series, don’t be surprised if “Pop” coaches the Spurs to a first-round upset.