A Pennsylvania jury found a white former police officer not guilty of criminal homicide in the 2018 shooting death of an unarmed black teenager outside Pittsburgh. A jury in Harrisburg, Pennsylvania, reached their verdict after deliberating for about three and a half hours Friday.

“Antwon Rose posed no risk to Michael Rosfeld. It doesn’t look good because it isn’t good,” Fodi said, according to CBS Pittsburgh. “There was no need to use deadly force. This is not reasonable police work by an officer.”

Defense attorney Patrick Thomassey said in his closing argument that Rosfeld was justified in shooting the fleeing teenager because the officer believed he was in danger.

Judge Alexander Bicket finished giving the jury instructions Friday afternoon following closing arguments and sent the panel to deliberate, reports CBS Pittsburgh. The jury of six men and six women, including three African-Americans, was selected across the state in Harrisburg and has been sequestered in a Pittsburgh hotel for the duration of the trial.

Rosfeld had just pulled over an unlicensed taxicab suspected to have been used in a drive-by shooting minutes before shooting Rose in the back, arm and side of the face as he ran from a traffic stop.  Rose had been riding in the front seat of the taxi when Zaijuan Hester, in the back seat, rolled down a window and shot at two men on the street.

Hester, 18, of Swissvale, pleaded guilty last week to aggravated assault and firearms violations for the earlier shooting, which wounded a man in the abdomen. Hester told a judge that he, not Rose, did the shooting.

Rosfeld told jurors that he thought Rose or another fleeing suspect had pointed a gun at him. Neither teen had a weapon on him at the time. The defense has asserted that Rose was complicit in the drive-by shooting by identifying the target to the gunman, Hester. Rose had an empty ammunition clip in his pants when he was killed, and two handguns were recovered from inside the vehicle.

“Michael Rosfeld didn’t get up that morning and say, ‘I’m going to kill someone,’ but Antwon Rose and his accomplices did,” Thomassey said in his closing argument, the station reports. “Can you say this wasn’t justified beyond a reasonable doubt? There is only one verdict — not guilty.” 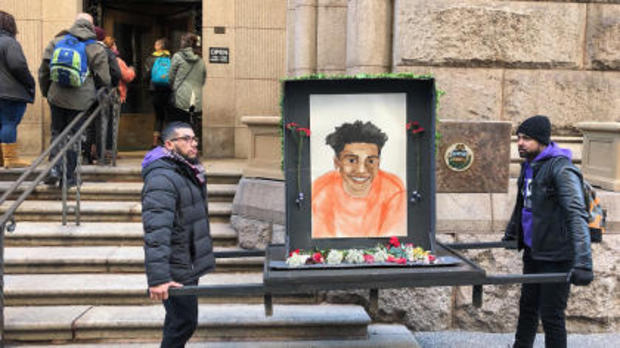 A witness who testified Wednesday, neighbor John Leach, said he was standing on his front porch smoking when the shooting happened, reports CBS Pittsburgh. He said he saw Rosfeld fire three shots just as Rose turned and fled. Leach said he “couldn’t believe his eyes.” After the shooting, he was standing by Rose’s body, watching Rosfeld on the sidewalk nearby saying repeatedly “I don’t know why I shot him. I don’t know why I fired.”

Speaking to the Associated Press before closing arguments got underway Friday, Rose family attorney S. Lee Merritt said the jury should conclude that Rose was “murdered.”

Merritt says “it’s pretty obvious” Rose was not a threat to Rosfeld.