Medal of Honor awarded to soldier who sacrificed himself

Washington — President Trump presented the Medal of Honor Wednesday to the family of Army Staff Sgt. Travis Atkins. It’s the military’s highest award for bravery in battle and Atkins died so other soldiers could live.

It was on the first of June 12 years ago that Atkins called from Iraq to tell his parents he was about to take his men out on a mission.

“He did say that he was sorry he had forgotten to get something in the mail for me for Mother’s Day,” said his mother Elaine Atkins.

Just hours later, Army officers arrived to tell them their son was dead.

Army Sgt. Travis Atkins with his parents, Jack and Elaine Atkins, during a visit to see him at Fort Drum, N.Y., in 2006. The Atkins Family/Department of Defense

“After we spoke to the chaplain, I went to the mailbox and there was a little package from Travis with a Mother’s Day card for me and a Father’s Day card for Jack. The card said ‘Thanks for everything’  and it just brought it home,” Elaine said.

It was only when they met with Sand Aijo and other soldiers in Atkins’ unit that they found out how he died.

“He had definitely sacrificed himself so that we could live,” Aijo said.

Aijo was the machine gunner in their humvee and he watched as Atkins and the team’s medic got out to search two men they suspected of planting roadside bombs.

“That’s when Travis started to actually engage in a form of hand to hand combat with this man. Travis bear hugged the man, lifted him off the ground and slammed him down,” Aijo said.

Aijo didn’t realize it yet, but the man had pulled the pin on a grenade to detonate a suicide vest. Atkins was wrestling himself into position to shield his men from the blast.

When Aijo found out Atkins was going to receive the Medal of Honor, he said it felt good to see there was a “grateful nation” that was as thankful as he was.

Atkins’ father, a Vietnam veteran, says none of that surprised him because he had talked to his son about being a soldier.

“We talked about the responsibility of what you owe to people who are serving under you, and what you need to do to protect them,” Jack Atkins said.

The medal was presented to Atkins’ son Trevor Oliver, who was 10 when his father died. It is, of course, this nation’s highest honor, but perhaps not Travis Atkins’ greatest achievement.

“The real reward is what your men think of you,” Jack said.

That was on full display when those who served with him — privates to colonels — were asked to stand. 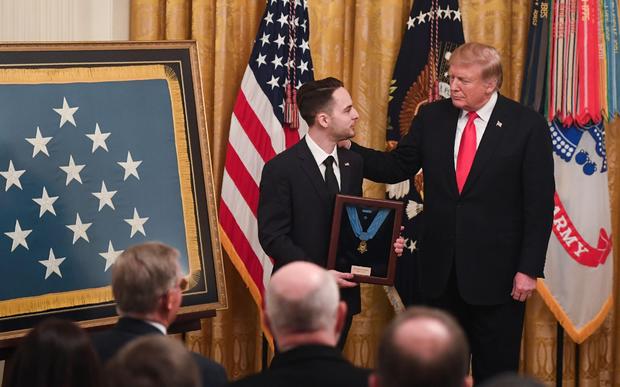 US President Donald Trump presents a posthumous Medal of Honor for US Army Staff Sergeant Travis Atkins, to his surviving son Trevor Oliver, during a ceremony in the East Room of the White House in Washington, DC, March 27, 2019. Saul Loeb / AFP/Getty Images