Dog rescued after nearly a month in rubble

A dog who survived Hurricane Dorian is being called a “miracle” in the Bahamas. The people who rescued the dog have named him Miracle because he survived underneath rubble for about a month.

Rescuers from Big Dog Ranch Rescue in Loxahatchee Groves in Palm Beach County say they have rescued over 100 dogs since the devastating storm him the Bahamas. They have used a drone to aid their recovery efforts and the technology was integral during this particular rescue.

The rescuers located the dog pinned underneath an air condition and building debris in Marsh Harbor. After comforting him with food, rescuers were able to pull him out of the debris.

The team rushed the pup to their ranch for lifesaving medical treatment. He was emaciated after not eating for nearly a month — but he miraculously survived. So they named him “Miracle.”

The dog was emaciated but miraculously survived. So, they named him “Miracle” Big Dog Ranch Rescue

“What an incredible story that we were able to discover this dog alive after being trapped for so long,” Big Dog Ranch Rescue Founder and President Lauree Simmons told CBS Miami. “We are using the latest technology for our recovery teams to locate these animals. In this case, drones played a key role.”

Miracle is the 138th dog rescued by Big Dog Ranch Rescue in the Bahamas. The organization is working with the Humane Society on the island to clear shelter space for new dogs. Miracle arrived on Friday, and will stay until his family claims him.

If no one claims Miracle, Big Dog Ranch will work to find him a forever home. The rescue team encourages those who would like to help or adopt to visit BDRR.org for more information. 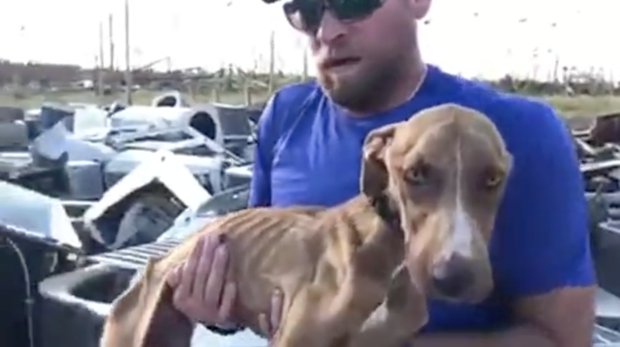