At the moment four strap-on boosters separated from the rocket’s core stage, he and Soyuz MS-10 commander Alexey Ovchinin were thrown violently from side to side and then plastered back in their seats as escape rockets fired to push their Soyuz capsule away from its malfunctioning booster.

After a brief moment of surprise — it was the first aborted launch for the normally reliable Soyuz booster in 35 years — training kicked in as Ovchinin and Hague began working through their checklist for an emergency return to Earth.

The shaking and rapid acceleration only lasted for a few seconds, Hague said, followed by a few moments of weightlessness as the Soyuz spacecraft floated to the top of its abort trajectory and began plunging back to Earth.

For Hague, who was making his first space flight, the long-awaited goal of finally flying in space was just out of reach outside his cockpit window.

The Soyuz MS-10 spacecraft climbs away from the Baikonur Cosmodrome in Kazakhstan on Oct. 11. Two minutes after launch, a malfunction forced the crew to make an emergency return to Earth.

“There was a point where we got to the apex of our trajectory and I looked out the window and I saw the curve of the Earth out there and the blackness of space, and it was a bittersweet, fleeting moment knowing I got that close and it wasn’t going to work out,” Hague said in an interview with CBS News.

“What can you do? Sometimes you don’t get a vote,” he said via satellite from the Johnson Space Center in Houston. “So this time, we’ll roll with the punches and you just try to celebrate the little gifts that you get. Like walking (our) boys to school this morning.”

Hague and Ovchinin blasted off from the Baikonur Cosmodrome in Kazakhstan last Thursday, kicking off a planned six-hour rendezvous with the International Space Station. Standing by to welcome them aboard the lab complex were Expedition 57 commander Alexander Gerst, NASA flight engineer Serena Auñón-Chancellor and cosmonaut Sergey Prokopyev.

The early moments of the climb to space appeared normal, but two minutes after liftoff one of the four liquid-fueled strap-on boosters making up the Soyuz FG rocket’s first stage apparently crashed into the side of the central second stage booster.

The Soyuz spacecraft atop the rocket was equipped with a variety of abort systems to pull or push the crew to safety at any point during the climb to space. A failure in the first minute and 54 seconds would have triggered a Phase 1 abort, automatically igniting an escape rocket on the nose of the Soyuz spacecraft to rapidly pull the crew away from a malfunctioning booster.

Just under two minutes into flight, the escape tower is jettisoned and the crew relies on thrusters built into their Soyuz spacecraft to push them to safety, a procedure known as a Phase 1A abort. That is the procedure that was triggered during launch last week, setting up a steep “ballistic” trajectory that subjected the crew to 6.7 times the normal force of gravity as their descent module slammed into the thick lower atmosphere. 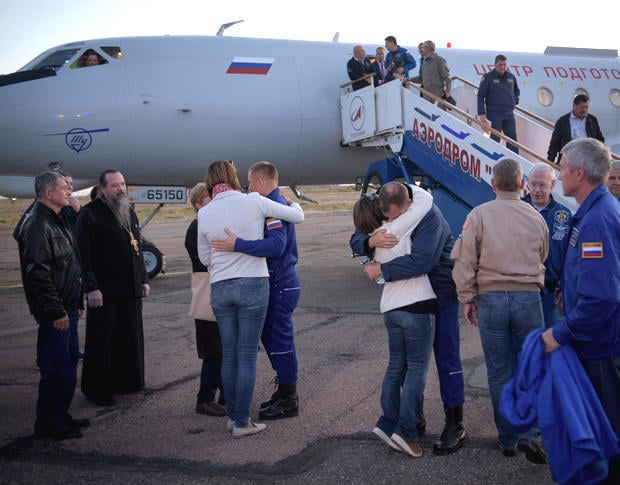 Nick Hague and his wife, Catie, enjoy a hug after returning to the Baikonur Cosmodrome following a dramatic launch abort. Mission commander Alexey Ovchinin can be seen at left center embracing his family.

“On the way down, the G-loads were higher, they were more elevated, about seven Gs coming back in on our ballistic trajectory,” Hague said. “A normal reentry, you might experience four or five Gs, so it’s not that much more. It wasn’t too uncomfortable to get through those Gs. Then after that, it was a normal landing.”

Descending under a large parachute, Hague and Ovchinin settled to a jarring rocket-assisted touchdown near the town of Dzhezkazgan, Kazakhstan, about 250 miles from the launch site. Russian recovery crews were on the scene in minutes.

Ovchinin called his wife using the crew’s satellite telephone, but when Hague tried to reach his wife Catie, the call went to voicemail. By then, however, family and friends at Baikonur knew the crew had landed safely.

Both men were flown back to the cosmodrome where Hague and his wife shared a long hug on the runway. Both are active-duty Air Force officers who met while attending the U.S. Air Force Academy.

“I’ve got to tell you, when we finally got to hug each other coming down off the plane it was a bit of a release for both of us, the emotions we had kind of been holding back just to stay focused on the situation,” he said. “As for the boys, my youngest, God bless him, he looks at me and he goes, ‘Dad, when are you going back to space?'”

Hague credited his extensive Soyuz training and a 20-year career in the Air Force with preparing him for what turned out to be a wild ride.

“You know, I think what kicks in is the training, right? I’ve spent my Air Force career in high-stress situations, and this isn’t the first emergency that I’ve been a part of in-flight,” he said.

“You realize the training is there to keep you safe. The thing that I can do to help get us down on the ground as safe as possible is to try to stay as calm and as focused as I can and do the things that I need to do to make us be successful. So as soon as we saw the booster failure light … we just started executing the procedures like we had done dozens of times before (in the simulator) and tried to be as precise and accurate as we could.”

Hague said he “didn’t have a clue” when he and Ovchinin might get a second chance to fly in space, “but I can say that I’m ready to go 100 percent.”

“In terms of whether I have second thoughts about the Soyuz, this has only helped to solidify my appreciation for how robust that system is,” he said. “That (abort) system hadn’t been tested in 35 years. But we tested it last week, and it’s ready.”

The launch abort threw a wrench into the space station crew rotation schedule.

Had Ovchinin and Hague reached the space station as planned, the lab’s current crew would have returned to Earth on Dec. 13. Hague and Ovchinin would have had the station to themselves for about a week when three fresh crew members — Oleg Kononenko, Canadian astronaut David Saint-Jacques and NASA astronaut Anne McClain — were scheduled to arrive aboard the Soyuz MS-11/57S spacecraft. 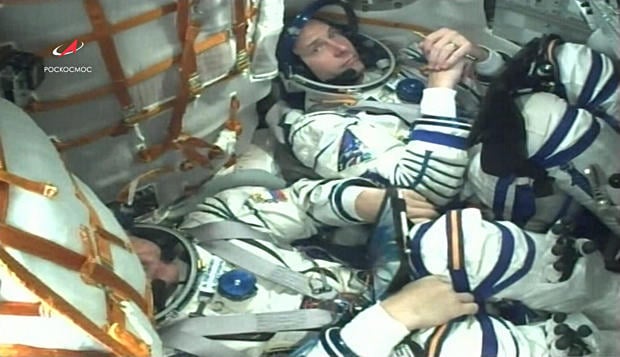 Ovchinin, left, and Hague, right, are seen inside their Soyuz spacecraft before launch.

Assuming a Russian failure investigation gets to the bottom of the launch abort in time, space station managers likely will consider moving up the Kononenko crew’s launch to late November or early December. At the same time, the current station crew’s stay in orbit could be extended a few days or weeks past its current Dec. 13 landing date to allow more time for joint activities.

But Gerst, Auñón-Chancellor and Prokopyev’s Soyuz MS-09/55S spacecraft, which carried the trio into space last July 6, is only certified for about 210 days in orbit and they must return to Earth by around Jan. 4 at the latest. But they almost certainly would head for home sometime in December.

If that scenario plays out, Kononenko, Saint-Jacques and McClain would operate the station by themselves until the next scheduled Soyuz launch in early April. Before the launch abort, that flight included Oleg Skripochka, NASA astronaut Christina Koch and a United Arab Emirates guest astronaut.

The guest astronaut originally planned to return to Earth with Ovchinin and Hague around April 16. But in the wake of the abort, it’s not clear who will be joining Skripochka and Koch next April or even if that crew might get shuffled.