NASA’s OSIRIS-REx science probe, orbiting a small asteroid called Bennu for the past year, will move in for an attempt to snag rock and soil samples next summer, targeting a site known as Nightingale that offers the best balance of risk and science return, mission managers announced Thursday.

It will not be easy. A towering mound of boulders half-jokingly dubbed “Mount Doom” rears up just to one side of the sample site, an obstruction that will require OSIRIS-REx to execute an extremely precise touch-and-go approach.

NASA’s OSIRIS-REx probe will attempt to collect surface samples from asteroid Bennu next year at a site known as Nightingale that offers the best science return. A backup site – Osprey – is available if needed. NASA

“It’s a substantial, building-size obstruction, and we’re trying to get into a crater that’s on the order of a few parking lot spaces wide,” said Dante Lauretta, the OSIRIS-REx principal investigator at the University of Arizona.

“So we are doing a really tight job parking, and we’re aware that we have hazards around us. So precision navigation to that sample material is our biggest challenge.”

Engineers have developed software that will enable OSIRIS-REx to abort an approach to Nightingale if it turns out the probe cannot safely reach its target. If an abort stirs up rocks and prevents a second attempt, the spacecraft will move to a backup site known as Osprey.

Either way, Lauretta is confident OSIRIS-REx will succeed in the end, bringing samples of Bennu back to Earth in 2023.

“Just thinking that we’re going to get this sample back to Earth sends chills down my spine,” he said during an update from the American Geophysical Union’s fall meeting in San Francisco.

Since then, it has been using an advanced camera, two mineral sniffing spectrometers, a laser altimeter and a student-managed X-ray imaging system to map Bennu’s surface in extraordinary detail. The asteroid is slightly wider than the Empire State Building is tall with a diameter of about 1,614 feet and a mass is estimated at about 85.5 million tons.

OSIRIS-REx is equipped with a “Touch-and-Go Sample Acquisition Mechanism,” or TAGSAM, on the end of a 10-foot-long robot arm. The collect samples, the probe will creep up to Bennu, pressing the pie pan-shaped TAGSAM collector against the asteroid’s surface for about five seconds before backing away.

On contact with the surface, a jet of nitrogen gas will stir up soil and small rocks that will then be captured by TAGSAM. The material will be placed in a sample return container for a two-and-a-half-year flight back to Earth. Landing in Utah is expected in September 2023.

“When we first got there, the most obvious feature that we saw were these abundant, very large boulders and overall a rough and rugged surface very different than what we designed the spacecraft to sample,” Lauretta said.

“We were (planning for) sampling areas that were 25 meters (80 feet) across, and quite honestly, I thought it was going to be obvious from the first images where the sample regions were and that it was going to be a straightforward site selection. And it was nothing of the sort.” 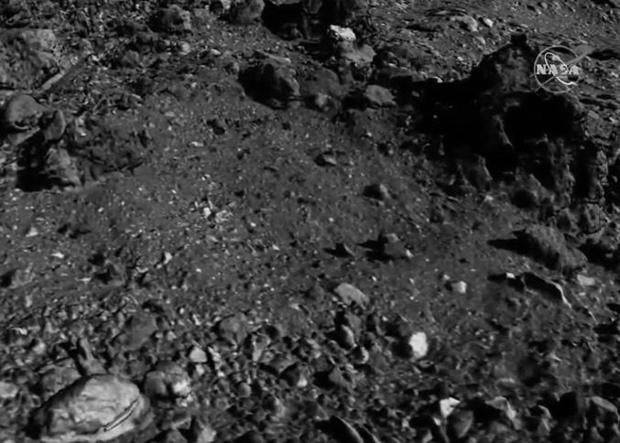 An oblique view of the Nightingale sample site with “Mount Doom” visible at top right. NASA

After mapping Bennu, the team came up with four candidate sample sites. When all was said and done, Nightingale was the winner.

“We recognize that this does have some hazards around it, and so we are doing a lot of work to make sure that we’re targeting the safe regions,” said Lauretta. “But this one really came out on top because of the scientific value.

“The high latitudes means that it stays relatively cool, and the primary objective of OSIRIS-REx is to bring back organic material and water-bearing material from the early solar system. Being in those high latitudes gives us the best chance to preserve that kind of material.”