Charlottesville, Va. — In a case that stirred racial tensions across the country, a self-avowed white supremacist pleaded guilty Wednesday to federal hate crime charges in a deadly attack at a white nationalist rally in Virginia, admitting that he intentionally plowed his speeding car into a crowd of anti-racism protesters, killing a woman and injuring dozens.

James Alex Fields Jr. of Maumee, Ohio, pleaded guilty to 29 of 30 federal charges stemming from the “Unite the Right” rally in Charlottesville on Aug. 12, 2017. Heather Heyer, a 32-year-old paralegal and civil rights activist, was killed, and nearly three dozen others were injured.

Under a plea agreement, federal prosecutors will not seek the death penalty against Fields and will dismiss the one count that carried death as a possible punishment. The charges he pleaded guilty to call for life in prison under federal sentencing guidelines.

Fields appeared stoic, with his hands folded in front of him for much of the hearing. He repeatedly responded “yes, sir,” when U.S. District Judge Michael Urbanski asked him if he was pleading guilty knowingly and voluntarily.

Under a “statement of facts,” Fields admitted that he “expressed and promoted” white supremacist ideology through his social media accounts and engaged in white supremacist chants during the rally in Charlottesville. He also admitted driving his car into the ethnically diverse crowd of anti-racism protesters because of their race, color, religion or national origin.

Fields, 21, was convicted in December in a Virginia court of first-degree murder and other state charges.

Heyer’s mother, Susan Bro, spoke to CBS News on the anniversary of her daughter’s death in 2018. She said it was “difficult to say” if the country had made progress since the deadly attack.

“What appeared to be closer together a year ago was not truly close together. It was more of an artificial covering over deep-seated wounds, a deep seated-infection in our society,” Bro said. “I think last year’s eruption gives us a little better understanding of how bad it is so that we can gradually and slowly heal. If you rush to heal, if you rush to grab each other and sing Kumbaya, we will be back here in a few years.”

Bro and Heyer’s father have agreed they did not want prosecutors to seek the death penalty.

President Trump sparked a national uproar when he blamed the violence at the rally on “both sides,” a statement critics saw as a refusal to condemn racism.

After Tuesday’s hearing, U.S. Attorney Thomas Cullen said he hoped the plea agreement would help the victims move on with their lives.

“The defendant’s hate-inspired act of domestic terrorism not only devastated Heather Heyer’s wonderful family and the 28 peaceful protesters … but it also left an indelible mark on the city of Charlottesville, our state and our country,” Cullen said.

Cullen said prosecutors had been in talks with Fields’ lawyers for months about a potential plea agreement, but did not seek to finalize a deal until U.S. Attorney General William Barr last week authorized him not to seek the death penalty if Fields agreed to plead to 29 counts.

The car attack by Fields came after violent brawling between the two sides prompted police to disband the crowds.

During his state trial, prosecutors said Fields — who described himself on social media as an admirer of Adolf Hitler — drove his car into the crowd because he was angry after witnessing earlier clashes between the white nationalists and the counterprotesters.

The jury rejected a claim by Fields’ lawyers that he acted in self-defense because he feared for his life after witnessing the earlier violence.

During the plea hearing Wednesday, Fields — responding to questions from the judge — said he has been treated for mental health issues since he was 6. He said he is currently on medication for bipolar disorder, depression, anxiety, schizoid disorder, explosive onset disorder and ADHD. 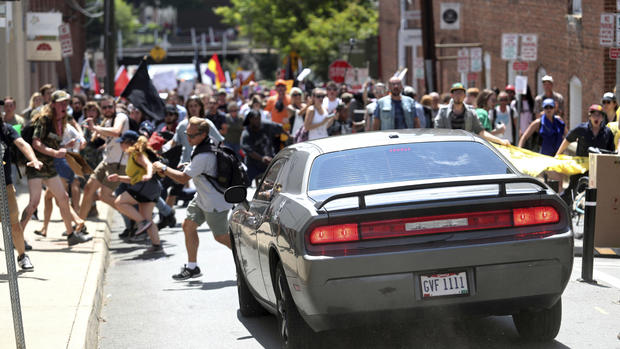 More than 30 people were hurt in the car attack. Some who received life-altering injuries described them in anguished detail during the state trial.

Jurors in Fields’ state trial recommended a life sentence plus 419 years, although a judge still has to decide on the punishment. Sentencing is scheduled for July 15.

A reporter asked Bro if she thought her daughter’s death had served some purpose, such as opening a discussion of race relations. She answered: “Sadly, it took a white girl dying before anyone paid attention to civil rights around here … Heather’s death is at least a catalyst for change.”

Bro said she wouldn’t have chosen that catalyst and added, “I wish we would have woken up sooner.”